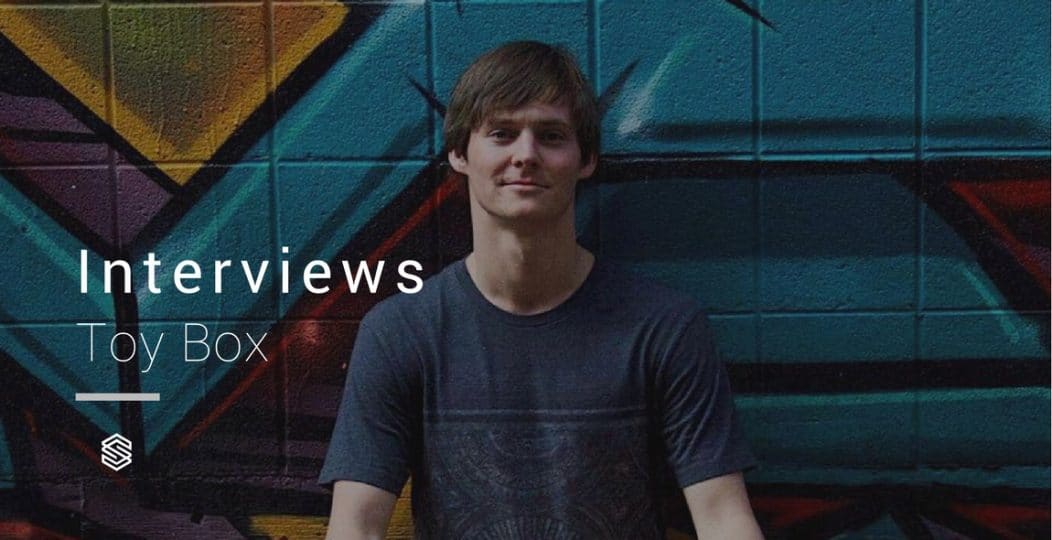 Lush synths, sweet & melancholic melodies, organic ear candy, memorable vocals, and crafty beats are all part of this creative producer's musical pallet. Having released on Artist Intelligence Agencies Hegemeon and Chinchilla and the popular You Tube channel Chill Nation, Toy Box continues to leave his mark on todays crowded music scene with each and every release. We got a chance to find out just how this talented producer began his musical journey and how he navigates through the difficult stages of the production process.

SoundShock: How did you come up with your artist name?

When I first started learning synthesis, the sounds I made reminded me of little toy cars and remote control vehicles and such. That was about the time I started learning how to produce on my computer aka “in the box”. Hence the name, Toy Box.;

What made you want to start making music and get into production? How have things changed since then?

In 8th grade I won some time in a local studio at a silent auction. My band and I learned a few covers and recorded them down the road from my house in this guy’s studio. The next year, at the beginnning of high school I took Audio Production every day at school. It was a very open ended class and I got plenty of time to experiment with Pro Tools. It was really just something to fill up my credit hours for my diploma, but I ended up taking it all years of high school and really putting some good time into it outside of school too. Instead of Pro Tools I mostly use Ableton now. My synthesis has improved so much since the beginning and I think my overall songwriting and compositions have become much more memorable. I’ve developed a much better ear for what makes a good track. I feel like I have narrowed down my sound a lot since I started or even since a couple years ago. My production has gotten bigger, louder, and tighter after all the time I spent practicing.

How do you approach the production process when you're first starting a track?

I usually start by writing down the music on my phone, in my head, or on paper. I’ll be jamming on mandolin (my main instrument) to find some chords that are new to me. These chords become the harmony for my tracks. Then I focus on the drums to make them sound great, this can take hours. I begin adding all my best synth patches and instruments until there is too much and then I erase layers. The process is very subtracting like I am drawing a picture and then erasing. It’s like I am drafting a thesis. The melody often results from chopping up a recording I did and rearranging it. I first get a good sound and then I add it into the beat. Sometimes I just make sounds without having a song idea in mind. Doing this can make the creative process more enjoyable because I have new good sounding material to work with when I do feel like making a track.

A big sticking point for producers is not being able to finish tracks. Do you have any specific techniques that help you get past this?

If I have been working on a loop for too long and don’t know where to go, I will reach out to a musician friend to jam with whatever I’ve got so far. When I do this, I remove a lot of the melodic ideas except for the vocals and leave the percussion. My friend can jam freely to the general harmony I’ve chosen. Listening to the song in this state will usually inspire a fresh feeling that I then want to impart. Also, working on multiple projects at once can help keep your perspective fresh. This way you are less likely to get stuck in a rut and find the right parts to finish a track. One big thing if you are stuck is to just get rid of a couple pieces. Try it out, I bet it helps.

Another big problem when producing for many artists is getting a full mix. The song might be great, but there seems to be a lack of power and energy. What are a couple of ways you get your tracks to really full sounding?

Make sure none of the elements in the track are overbearing and make sure they all have a significant impact on the track. I think something that a lot of bedroom producers probably don’t understand is the art of mixing. Kids seem to just want to make bangers that have fat loud drums and heavy synths. What really makes a great record though is that there is a balance between all aspects of the track. If one thing is just a touch too loud it can compromise the fullness of a track. Try to mute a track and see if it makes an impact. The track should still carry itself fairly well without it. If there is no difference, then that track is probably pointless. Another idea is to keep revising your sounds. Killer sound design is key to electronic music. If there is a shitty synth in the mix it can ruin a track, but if there is one really rad synth, you could pretty much dedicate a whole new part of your song to making it the centerpiece. Basically, make sure that every sound is the best that it can be and the whole track will probably sound solid.

Treat it as if it were an instrument and you had to practice every day. Get in the habit of dedicating time to your craft consistently if you expect to make progress. Just like a guitar, if you practice enough you will learn to speak in your own way with it. Add sounds that you generally don’t hear that often. Play an instrument as well and incorporate that. It is hard to make an original sounding song with just synthesizers. The organic element will take your tracks to another level. Make sure to stay restrained when adding elements and do not overcrowd your songs with tracks or else the song will have no identity.

"If you are stuck on a track, just is to get rid of a couple of pieces. Try it out. I bet it helps."Toy Box

I usually use vocal chops and I use a lot of layering when I am adding synthesizers. I try to remake all the samples I can with synthesizers, such as a sub bass. Practicing synthesis in this way can help you learn to make your own sounds that you can use in future projects.

Don’t try to copy anyone, you can make any sound that you can imagine so why not use your imagination to create something that hasn’t been heard yet?

What's next for Toy Box? Any upcoming EP's, singles, an album in the works?

My remix of What You Need by BAYNK is coming out at the beginning of this year. I was really stoked when I got the request from him. I’m always dropping new stuff on soundcloud too. I’ve got some originals in the works. I can’t wait to release some full songs for the first time. Most of my stuff has been instrumental thus far, but I am now getting into writing lyrics and working with singers.