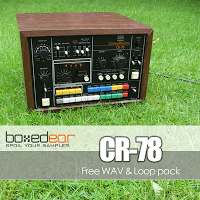 by Boxed Ear
by Daniel Strongin

Boxed Ear has released CR-78 Free WAV & Loop Pack, a collection of 17 one shot WAV files and 27 RX2 Recycle loops (they work with FL Studio). All sounds are recorded from Roland CompuRythm CR-78 thru a Universal Audio 1176 compressor.

"The Roland CompuRythm CR-78 was released in 1978. It’s a beautiful piece of design with a sound to match. They don’t make them like this anymore.

The CR-78 became a favourite amongst pop and electronic artists for it’s unique sound. Famous songs which use it include Orchestral Manoeuvres in The Dark’s “Enola Gay” and Blondie’s “Heart of Glass”. The CR-78 was also one of the first drum machines to offer user programmable sequences alongside the standard Waltz, Shuffle and Samba presets."